The MP3 Player Almost Nobody Remembers 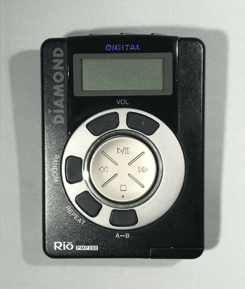 The first generation of products based on that innovation trigger are often letdowns, and largely through no fault of their own. The “First TO market” is not always the “best IN market.” Everyone expects the innovation trigger to proliferate quickly, but more often than not, there are legacy ways of working and thinking, or sometimes external forces that need to be tweaked or altogether re-defined for that innovation trigger to fulfill its promise. Instead of the rapid adoption of “the new way,” we end up with products that take advantage of the new, technological breakthrough but don’t actually deliver a step-function more in value to cause us to get rid of “the old way.”

Almost no one remembers the Diamond Rio MP3 player for one simple reason - the user experience was underwhelming. Access to music back then was either complicated or illegal, and it held a miniscule number of songs. While it did a great job of playing MP3’s, downloading your own MP3’s before Napster and changing songs on your device every day was reserved for technology fiddlers who appreciated the novelty over the practicality. With the iPod, we got the option to have a massive 1,000+ songs in one spot, and eventually, the iTunes store, making it trivial to enjoy a wide range of music. When digital music came about, it was obvious our end state would not be CD’s or tapes any longer, but someone needed to come in and re-architect the entire music consumption process to make it so easy that everyone’s grandparents could enjoy iPods. The same is true of data driven factory management - the end state is obvious, but the user experience of the last several years has been a letdown.

“Your machines can talk now….and you’re going to see everything effortlessly and immediately”

When the ability to pull data from factory equipment became ubiquitous, the utopian image was created. Images were created in one’s mind of a factory worker walking around aided by VR goggles just looking at a machine and knowing exactly when a job would finish, when a bearing would die, when the oil would need to be changed, and how much money they were going to make on the current running job.

That image persists today, but mainly as a symbol of the peak of inflated expectations. There are ERP systems, paper processes and charts, people with lots of information in their heads, and something that encapsulates and replaces all of that quickly and painlessly is not yet pragmatic or cost-effective for the mass market. And as mentioned before, the reasoning has less to do with the technology and more to do with legacy workflows and thought processes. That is not to say that some of these ideas are impossible; it’s just not happening at scale, in a widely accessible way, for the mass market, YET.

“This data is nice, but it’s not quite what I was hoping for”

Those who embarked upon monitoring technology projects in manufacturing got some of what they bargained for, but in many cases they found the data unfulfilling and underwhelming. Knowing when your machines are running or not is better than not knowing, and knowing your utilization rates is better than ignorance too. But once you have that information, the actionability factor wanes quickly. Why is that machining center only 65% utilized? Is that good or bad? How do I turn that information into guidance for my workers that will yield improved results? Metrics without meaning became the fundamental letdown of these first generation products.

What we see happening in the factory data landscape now is a desire to put context around the data. Rather than hitting a wall once the metrics are known, the data should serve as a daily source of fuel for insight, course correction, and management. Context does not mean asking you or your team to input gobs of data, as that pulls people away from machines and quickly hits diminishing returns. Context is about framing the metrics in a way that allows you to judge not only magnitude, but also direction. Context is about putting the data into a language and framework that is native and natural to the way you already work. Context is about giving you building blocks that spark the correct conversations about productivity, business performance, and production standards.

We’ve taken a pretty unique approach to creating meaningful context in our Fusion product, and the response to date has been excellent:

Everything we do is hands-free, always on, and point-and-click. A user experience that meets with the demands, deviations, and challenges of daily factory life, with none of the burden and complexity of first generation data systems.

We’ve helped several shops that had the courage to deploy data collection technology early on but hit that brick wall of utility and were left wanting for more. The user experience that puts that data to work for you, rather than making you do more work to benefit from the data, is what everyone deserves and should expect as they think about factory data projects.